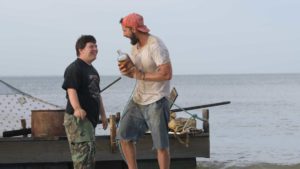 The Peanut Butter Falcon is a movie that can inspire the disability community. Zack Gottsagen is a disabled actor with Down Syndrome who plays a person with Down Syndrome struggling to fulfill his dreams while living in a nursing home.  This movie tells a story that many people in the disability community can relate to since many reside in nursing homes, group homes, or spend the day in day-habilitation centers.

It is my hope this movie will motivate those in the disability community to try and get out of their current situations to explore the world on their own and meet people in the community. Also, I hope it will help audiences understand the vulnerabilities of not only the main protagonist, Zak, but also the perspectives of the supporting actors who live in the nursing home, work in the nursing home, and even people he meets in the community.

The community is for everyone, but the community alone is not enough.  Individuals have to be strong and wrestle within themselves to do what they want in the community. Zak who has Down syndrome, seemed to have an easier time with social nuances.  Autistic people like me seem to struggle more with social nuances. I learned much about Down syndrome in this movie. It appears that people with Down Syndrome have an easier time standing up for themselves than I have as an Autistic person.  Zak is our protagonist and hero in the film. I think everyone can admire how Zak came up in to the world on his own from the nursing home to the community.

Zak wants to be a wrestler, but instead finds he is wrestling with his own life rather than becoming a professional wrestler on television. Zak fulfills his greatest dream.

I really enjoyed the movie last night at the JCC in Manhattan. I want to thank the Reel Abilities Film Festival for giving me a chance to preview this movie before it opens this Thursday.