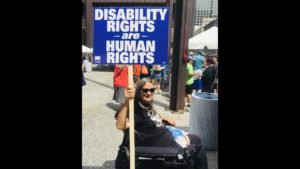 Marca Bristo, a trailblazer in the disability community who was born in New York State, passed away this week in Chicago.  Ms. Bristo helped co-write the Americans with Disabilities Act which was signed into law in 1990 and helped to pass the Convention on the Rights of Persons with Disabilities which was passed in the United Nations in 2006. Ms. Bristo, disabled as the result of an accident in 1977, was respected by everyone who knew her.  The extent of Marca Bristo’s influence was incredible. She fought hard not only for disability rights, but disability justice as well.  She helped found the National Council of Independent Living in 1982.

Marca Bristo was well respected and influenced many key people in the world. She won many awards and honors in her lifetime. Ms. Bristo lived her life to the fullest with as many connections as she could make and did as much as she could to move the world forward.  In every lifetime, there is just so much an individual can do, which leaves room for the next generation to continue the good work.

Jason Ross serves as a Peer Specialist at BRIDGES. He helps young and adult people with disabilities find their independence in the community. Jason is an advocate and a catalyst for change.