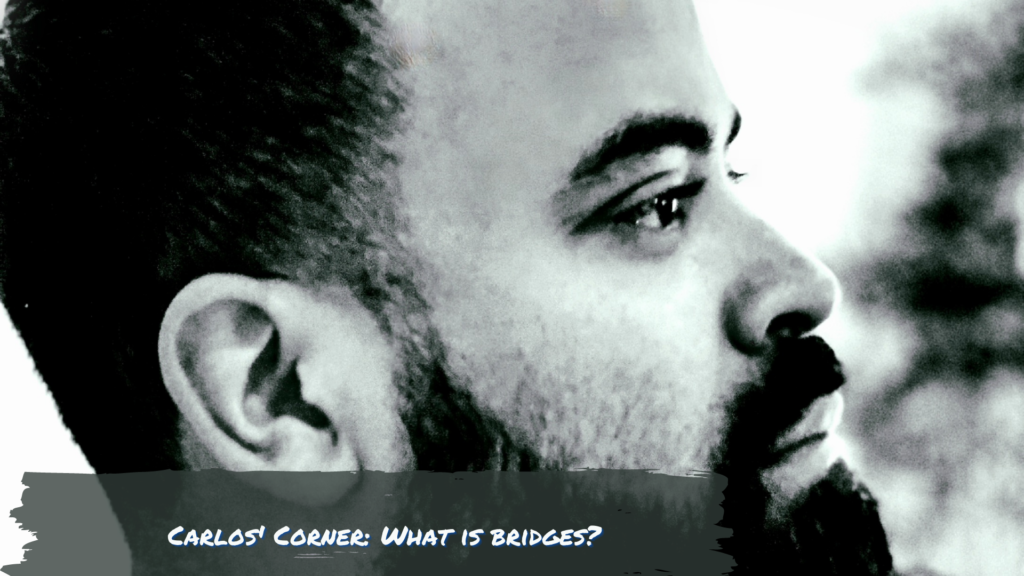 Carlos Corner What is BRIDGES

Why does BRIDGES exist? With so many different disability service organizations, one might ask, what makes BRIDGES different from the others?

To understand why BRIDGES exists we must shine some light on our history which is a major contributor to our purpose and our mission.  In the 60’s, people with disabilities had long realized that they lived in a world that was not designed for them. It wasn’t just that the world wasn’t designed for them, but in many cases — almost all cases — people with disabilities were simply outright excluded from all aspect of community living.

Some can’t imagine it today, but in the past, if you lived using a wheelchair (even today in some places around the world) you were excluded from life’s activities and essentially imprisoned at home with no real opportunity to be independent and part of your community.

These kinds of attitudes and behaviors are what is recognized as ableism. When able-bodied people view people with disabilities as less than. This comes in forms, including when we put a person on a pedestal as a sign of inspiration because of their disability. An excellent example of this is the words of Stella Young, a comedian and a journalist who speaks against society’s propensity to view people with disabilities as objects of inspiration. She talked about how graduating high school “earned” her a community achievement award when in fact, as she stated, she has done what is expected from every other high school student and that because of her disability she received an award that would have never been given to a non-disabled student graduating high school.

During the disability movement of the 60’s and 70’s, people showed the world they were independent thinkers, capable of contributing to society so long as we provided opportunities and access. People with disabilities knew they could and wanted to be able to make life decisions for themselves. They wanted to remove the barriers that prevented them from doing so. The ADA (Americans with Disabilities Act) was a product of the disability movement, signed in 1990, that prevents discrimination of any kind towards people with disabilities and requires that our infrastructure be designed for accessibility.

Ed Roberts was a person, an activist, and a student who experienced discrimination because of his disability. He was denied his high school diploma because he did not complete physical education and the driver’s education classes. Ed contracted polio at the age of fourteen, used a wheelchair for mobility, and was mostly paralyzed from the neck down. Ed advocated and received his high school diploma. It didn’t stop there.  He had to fight for his right to attend college and to get the support he needed to ensure he had the tools and accessibility to accomplish his goal of attaining a higher education degree.

Ed Roberts, aka the “Father of the Independent Living Movement,” started the first center for people with disabilities where they called themselves the “Rolling Quads” out of the University of California in Berkeley. His advocacy efforts led to improvements in accessibility that continue to this day — simple things like curb cuts and ramps that allow people with mobility disabilities to access a facility like anyone else. This eventually led to the opening of the first Center for Independent Living in Berkeley California in 1972. This center invited others with disabilities, to understand their rights and ensure they had the tools to live and lead an independent life.

The approach for services out of these Centers for Independent Living, like BRIDGES, was not to look like the traditional models of other not-for-profit or clinical agencies where the medical model and case work approach took precedent. Centers for Independent Living were agencies run and led by people with disabilities — agencies by and for people with disabilities offering a peer support and role modeling approach. This way, others who’ve experienced barriers that prevented them from moving on in life could be provided the tools directly from people who understood and who themselves achieved a degree of autonomy.

Our model for services can be best described by the well-known proverb that when you feed someone a fish, you feed them for a day, but if you teach them to fish, you feed them for a lifetime. BRIDGES does not clinically manage people nor do we manage medical and or psychological crisis.  In fact, there are agencies better equipped to handle those scenarios. BRIDGES’ role is to empower people to live and lead independent lives, know their rights, and know the resources and the tools available to achieve autonomy. Part of the process is ensuring that anyone seeking our services does the work that will help them achieve independence. Then, where there is a barrier that prevents the person from achieving autonomy, we advocate to remove it.

At our core, we provide simple everyday support to anyone seeking information or resources: Advocacy, Information & Referral, Peer Counseling, and Independent Living Skills Training. BRIDGES is a community center dedicated to helping our entire community understand the value and importance of accessibility, both for infrastructure and societal behavior; that access and universal design is the key to creating a more inclusive community for all. All of our services, including our home care program or Consumer Directed Personal Assistance (CDPA), our services to Veterans through our Dwyer Program and our work with the community of people re-entering the community looking for a second chance, follow the same framework and approach to services. Our work never ends, as we strive to build a more accessible Rockland County and with our partners across the globe, a more accessible world for all who live in it.