Editor’s note: this article was originally published at the Spina Bifida Association and reprinted with permission by the author, Reji Matthew, PhD, LCSW

The outpouring of emotion for the recent passing of tech genius, Steve Jobs, is validation of how much the magic of digital devices has become a central part of our daily lives. Phones and tablets are lifestyle managers, offering apps that help with organization, planning for dinner or checking one’s budget. Jobs will be remembered as a central inspiration for the digital age, but how people continue to make creative use of digital technologies is the post-Jobs story.

Bridging Apps is a innovative web community of parents and professionals who seek to share information on ways to use educational/therapy apps on the latest technology devices—iPad, iPhone, iPod, Android and others—to support developmental learning goals for people with disabilities.

Cristen  Reat and Sami Rahman co-founded Bridging Apps after meeting at a weekly parenting  support group that explores the use of digital tools for children with special  needs in Houston, Texas. “Bridging Apps started out of a need for an  organizational structure. There are over 40,000 educational apps out in the market now.  Just because an app says it’s designed for grades 2-3 does not provide much info on how it can be helpful,” said Rahman.

Bridging Apps is parent-driven, offering detailed  reviews on apps by skill, not diagnosis, such as color
recognition, social interaction, and language arts. “We wanted to keep the focus  on skills, as we know that each person is unique in his or her strengths and needed areas of support. Many of the apps can be downloaded on Apple and Android tablets. Devices will keep changing over time, but not the skills,” said Reat.

Rahman and Reat are believers in the benefits of apps, because they are parents of children with special needs and both have seen positive results. Reat experimented with adaptive  computer mice pads for her son, Vincent, age 6, who has Down syndrome, “Vincent was reluctant to hold a pencil due to his fine and gross motor issues. We tried  the iWriteWords  app on the iPad. He began to trace letters with his fingers; it had an  immediate cause-and-effect response with musical rewards. After a few weeks, he  became motivated to use his hands and began using a stylus, when then  transferred to using a pencil.” Rahman had similar success with his son, Noah, age 2, who has Cerebral Palsy. “Noah made gains in his speech through one of his  favorite apps, Monkey Preschool Lunchbox. He also responded  to the interactive nature of the app, and in addition, it also helped with this  finger isolation skills.”

Finding a useful and appropriate app  for particular situations can be time-consuming and overwhelming. Searching for  apps by skill, such as “expressive language” or “finger isolation” in iTunes or  Android Market does not yield results that are helpful. Frustrated with this  problem, Rahman designed a solution that would allow users to target their  search by specific attributes and skill.  The result is a powerful tool called “Insignio.” With Insignio, users can create and organize apps in a list, add  notes to each app in a list, comment and rate apps, and be directed to Android  Market and ITunes stores to purchase apps. By saving searches users don’t have  to redo their work and can see what’s new at the click of a button. 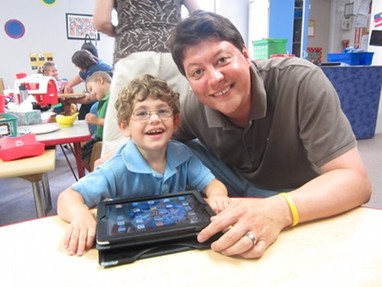 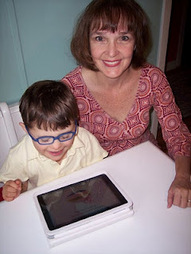 While Rahman and Reat are passionate about how apps can  enhance learning, they  have their caveats. “There are no magic bullets when your  child has special  needs”, said Rahman, “progress is accomplished by 1,000 little  tasks; digital  tools alone are not the solution. We view apps as one part of the  therapeutic team approach on behalf of your child.”

Reat cautioned,  “We also don’t encourage parents to run out  and by a device. Take a step back,  ask a few questions: What do you want a device  for? What skills  are you trying to improve? What goals do you have? Once you  find answers to  these questions, then decide on the best device for your child.”  Reat added  that it is critical to have client buy-in. “You can’t hand a device  to a child  and leave; there needs to be support for the child around that  device.”

Just over a year old, Bridging Apps has undergone impressive growth. The community has partnered with Easter Seals Greater Houston and the web-site is accessible in multiple languages. Bridging Apps offers a directory of funding sources for devices, a Facebook page, and a forthcoming checklist on  goals and expectations to use when deciding what type of device to  purchase.

If you are interested in joining the Bridging Apps community, you can register with  the site, which allows access to maximize use of the app search tool Insignio,  community boards and forums. You can share a success story, read helpful  articles and connect with other users of mobile devices. Bridging Apps continues to build momentum. Rahman  and Reat hope to expand to Bridging Apps support meetings around the world.