Call Now Directions
You are here: Home / BRIDGES-News / BRIDGES- Blogs / At the root of it all, It’s about Dignity & Worth.

“Every human being is an heir to a legacy of dignity and worth.” – Dr. Martin Luther King

As an Independent Living Center, BRIDGES works to break down barriers: that includes racism. BRIDGES provides advocacy and leadership, promoting autonomy and an integrated community that values each person’s dignity and worth. Racism is an obstacle that must be overcome to achieve that end.

Lately, it seems like everywhere we turn and all across social media, people are angry. We see people make statements and do things that contradict our values and beliefs. There is much to be angry about. We have seen unrest and destabilization in some communities. We have also seen communities come together, united against racism.

It is important to acknowledge that history matters. It’s easy to say that the past is the past; however, many people of color have scars that reach as far back as their ancestors. The past gives context to our actions and our future. It molds who we are and it spills out in our actions. History matters. To deny racism is to deny history. History shows legislation that gave people of color the right to vote, own property, and receive a quality education, but legislative bandaids do not get to the root problem – people’s hearts.

Racism and injustice values some lives more than others and displays notions of superiority/inferiority. This evil notion is the root of racism. Yes, people are angry. People are angry for many different reasons. We see people pitted against one other, taking positions that alienate us and lead to an “us vs. them” mentality. As a people, we must band together and value our common humanity. We must recognize that at the core of each protester’s chant and rally is to ensure that people of color are seen as valued members of our community with dignity and worth.

It requires that we listen and believe their hurt and embracing it as our own so we can stand together for what is right and just. An us vs them mentality is a divisive mindset that only tears us further apart. We must demonstrate humility (bringing down our walls and our guard) and listen intently in an effort to build trust. We saw a beautiful example of this with police officers across our country, removing their tactical gear, kneeling with protesters, and
walking alongside them. They chose humility in an attempt to reconcile what they, too, saw as wrong. They found a way to stand together.

These, too, are steps forward as we wrestle with the quiet prejudice of low expectations or preconceived notions that still exist in some people’s hearts.  Our voices in synergy are a powerful tool that can break down barriers. BRIDGES believes in the leadership of our founders and in the vision of a future free of systemic and attitudinal barriers. We must stand against discrimination, against hatred, against racism. We must stand for justice and we must stand for peace. And most of all, we must value and protect the Dignity and Worth of every human being. 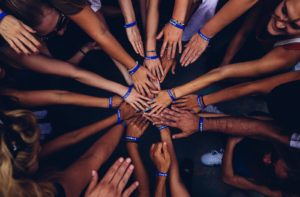